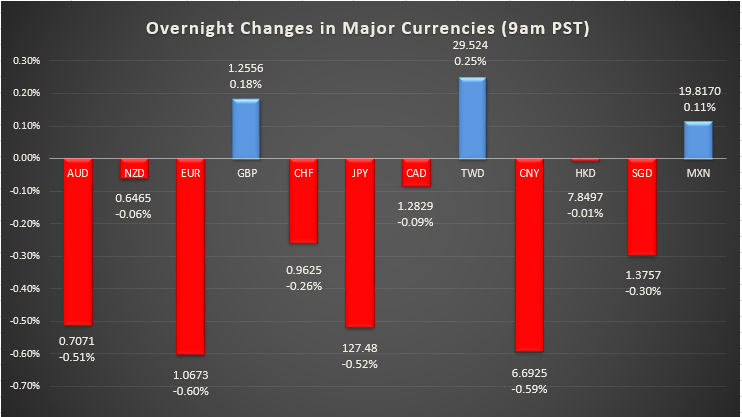 NZD spiked higher against its major trading partners after the RBNZ lifted its official cash rate by 50 basis points and signaled further hikes to ensure that consumer inflation returns to the target range. The Monetary Policy Committee decided to raise the country's OCR to 2% from 1.5%, as expected. It marked the fifth increase in the OCR from a record low of 0.25%. The RBNZ said that a more significant and earlier increase in the OCR reduced the risk of persistent inflation and provided more policy flexibility going forward in light of the highly uncertain global economic environment. The Committee agreed to continue to lift the OCR to a level that will confidently bring consumer price inflation to within the target range. The RBNZ Monetary Policy Committee agreed that higher rates are necessary to bring consumer inflation within the target range over the next two years. 05/25/2022 - 01:10AM (RTTNews)

EUR slipped against its major counterparts as the ECB warned that a faster monetary policy normalization by major central banks risked further sharp corrections in financial markets, while a policymaker remarked that the normalization process should not be equated with getting rates to the neutral level. The ECB said that further corrections in financial markets could be triggered by an escalation of the war, even weaker global growth or if monetary policy needs to adjust faster than expected. 05/25/2022 - 05:36AM (RTTNews)

This market update is prepared by Cathay Bank for informational purposes only and does not constitute any form of legal, tax or investment advice, nor should it be considered an assurance or guarantee of future exchange rate movements or trends. This information is provided without regard to the specific objectives, financial situations or needs of any recipient. Cathay Bank does not make any representations or warranties about the accuracy, completeness or adequacy of this market update.

Our specialists are happy to assist you with all your International Banking needs. Please reach out to our team for more information.