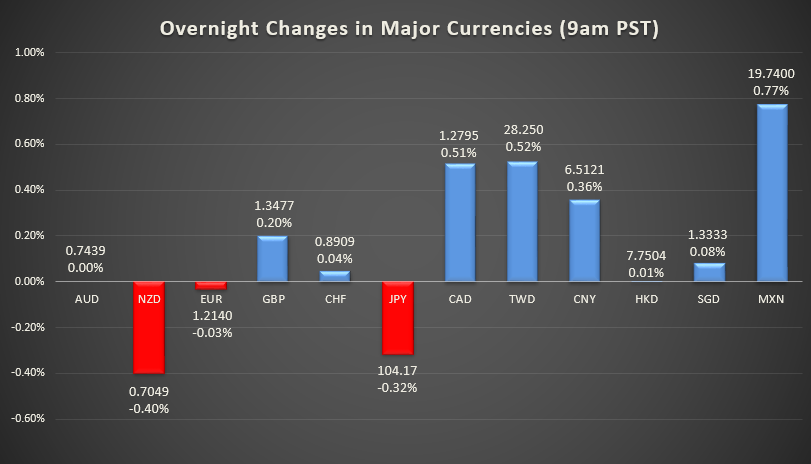 United States (US): Employment Rises Much Less Than Expected In November; USD Set For Worst Week In A Month

A closely watched report released by the Labor Department on Friday showed US job growth slowed by much more than anticipated in the month of November. The Labor Department said non-farm payroll employment rose by 245,000 jobs in November after jumping by a downwardly revised 610,000 jobs in October. Despite the weaker than expected job growth, the unemployment rate dipped to 6.7% in November from 6.9% in October. 12/04/2020 - 05:39AM (RTTNews)

USD was headed for its worst week in a month on Friday while the euro gained, as investors bet the USD has further to fall and that the worst of the COVID-19 pandemic may be over within months. A flurry of positive vaccine news has helped drive a rally in riskier currencies, while actions taken by the FRS have weakened USD. Investors have turned short dollars, figuring rates will stay low for a long time in the United States, forcing yield-seekers to head elsewhere for better returns. Investors will get a further indication of how the US economy is holding up at with monthly payrolls data expected to show employment growth, but at a slower pace. 12/04/2020 - 05:39AM (RTTNews)

EU is still negotiating a trade deal with UK, a top official with the bloc said on Friday morning, stressing that any agreement that may emerge between negotiators must still be approved by the 27 member states. European Council President Charles Michel said the next few days will show what comes next and the 27 leaders meeting remotely on Dec. 10-11 will take a position on the latest developments, as a deal on future relations between the EU and UK hangs in the balance. The European Commission, which is negotiating with UK on behalf of the 27 EU countries, will inform member states of the result of the negotiations once they are concluded. Any final approval by the 27 EU leaders would depend on the balance of any deal, especially on the most thorny issues: agreeing access to fishing waters and sharing out fishing rights, finding ways to settle disputes, and ensuring a level playing field, or fair competition for companies. It is essential to ensure that any deal was acceptable to the whole bloc, and that the UK had to decide if it wanted to sign up to ambitious social, labor and environment production standards to get a deal. 12/04/2020 - 12:33AM (RTTNews)

GBP hit a 2-1/2-year high versus USD on Friday as traders sought to add positions in the currency ahead of the weekend on expectations that UK will be able to clinch a post-Brexit trade deal with the EU. Traders ignored reports that the BoE could probably cut interest rates slightly below zero. The high in GBP suggests the market is positioning itself for a post-Brexit trade deal to be struck over the weekend. All eyes were on comments from EU officials, who said on Friday a deal could finally be done this weekend, disregarding London’s insistence that negotiations were still very difficult. GBP is see-sawing, sometimes wildly, on comments from UK and EU officials on the likelihood of a deal as the final Brexit deadline looms. Traders’ nervousness was reflected in the derivatives market, as one-week implied volatility gauges - derived from the cost of options and incorporating risk posed by next week’s European Council event. Even though the near-term deadline seemed to be this weekend, investors also looked for the virtual summit of EU leaders on Dec. 10-11, which could also be the last date to sign a deal. However, the two sides have missed many self-imposed deadlines and issues such as fisheries and state aid remain unresolved. 12/04/2020 - 01:36AM (RTTNews)