Cathay General Bancorp, the holding company of Cathay Bank, earned the ninth spot on the 2021 S&P Global Market Intelligence ranking of U.S. public banks by financial performance. The analysis looked at U.S. public banks traded on major exchanges such as Nasdaq, NYSE, or NYSEAM with more than $10 billion in total assets as of December 31, 2021.

“We are pleased to be one of the top 10 U.S. public banks,” said Chang M. Liu, President and CEO. “The recognition came at a fortuitous time as this year marks Cathay Bank’s diamond jubilee. Our success is a direct reflection of the hard work and dedication of our entire team.” 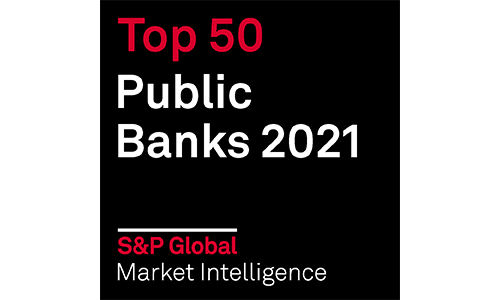 Cathay General Bancorp will be recognized and awarded at the 2022 Community Bankers Conference hosted by S&P Global Market Intelligence, May 16th through the 18th, 2022, in Dallas, Texas.

For the last ten years, the Community Bankers Conference, created by SNL Financial, has been the premier forum where influential executives, board members, investors, technology providers, and advisers put forward their visions and views of the strategic issues facing community banks, and actions for success.

This article does not constitute legal, accounting or other professional advice. Although the information contained herein is intended to be accurate, Cathay Bank does not assume liability for loss or damage due to reliance on such information.