A new U.S.-China trade agreement: around the corner?

The world breathed a sigh of relief when the U.S. announced that there would be no additional tariffs imposed on Chinese imports on the March 31, 2019 deadline. The explanation was that the trade negotiations between the U.S. and China were making progress. A full-blown trade war was avoided, for the moment. Although equity markets react to many different news items affecting company profits, it is not a coincidence that the Shanghai Composite index rebounded and almost recovered most of its loss in 2018 (Figure 1, red line), and the U.S. S&P 500 index (Figure 1, blue line) turned around at approximately the same time. But will an agreement take place? There are difficult issues still to be resolved. Nevertheless, there is some indication that movement towards a limited agreement is occurring. 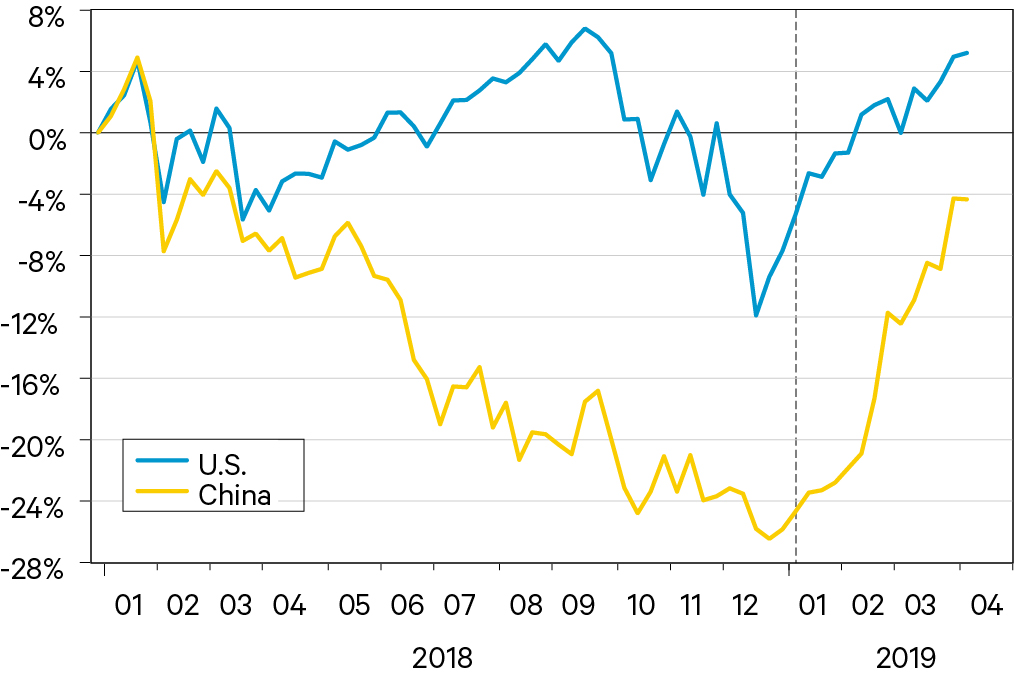 The information being reported in the press points to concessions on the part of both China and the U.S. that might be part of a modest trade deal. However, one should view this information skeptically as the release of it might well be a negotiating tactic. In the end, some may not be included in an agreement. Both Xinhua Press and Trump Administration officials have signaled that the following chapters are being negotiated:

Some of the items mentioned above are straightforward, less controversial, and likely have been agreed to. For example, a recent announcement by China that it would ban all variants of the opioid fentanyl, a U.S. request, is an easy concession to make. The purchase of more U.S. agricultural produce (at the expense of other countries’ farmers) is also relatively easy. These are signals of goodwill that China is likely hoping will bring the negotiations to a mutually beneficial close.

On the other hand, as we have discussed in previous reports, controversial demands on the part of the Trump Administration, which go to the heart of Chinese domestic economic policy, will be difficult if not impossible to resolve including:

In a commentary in Xinhua, as reported by the South China Morning Post, Chinese officials view the remaining issues as “tough nuts to crack.” We agree, but expect both countries to find some common ground in order to close a trade deal in the near term, and agree to continue talks on other issues in the future.

But, keep in mind that a new trade agreement does not mean there will be no tensions nor disputes between these, the two largest economies in the world, in the coming years. As we mentioned in previous reports, the world is in a new era of strategic competition between the U.S. and China, particularly in the fields of science and technology. For example, last month the U.S. Chairman of the Joint Chiefs of Staff told a U.S. Senate panel that Google’s work in China has been directly benefiting China’s military. In response, Google said it had dropped some ideas it had been pursing with the Chinese government. We expect more of this state scrutiny and regulation with respect to technologically sophisticated products and services in the future.

Figure 4 shows the top ten countries with trade deficits with the U.S. by the size of the deficit. China has the largest deficit accounting for about half of the total deficit. The China trade deficit increased from $376 billion in 2017 to $419 billion in 2018. While this is not surprising given that job growth and consumption are growing in the U.S., and given that the U.S. government’s fiscal deficit is expanding rapidly and needs financing, it is in the opposite direction from the goal stated by the Trump Administration. 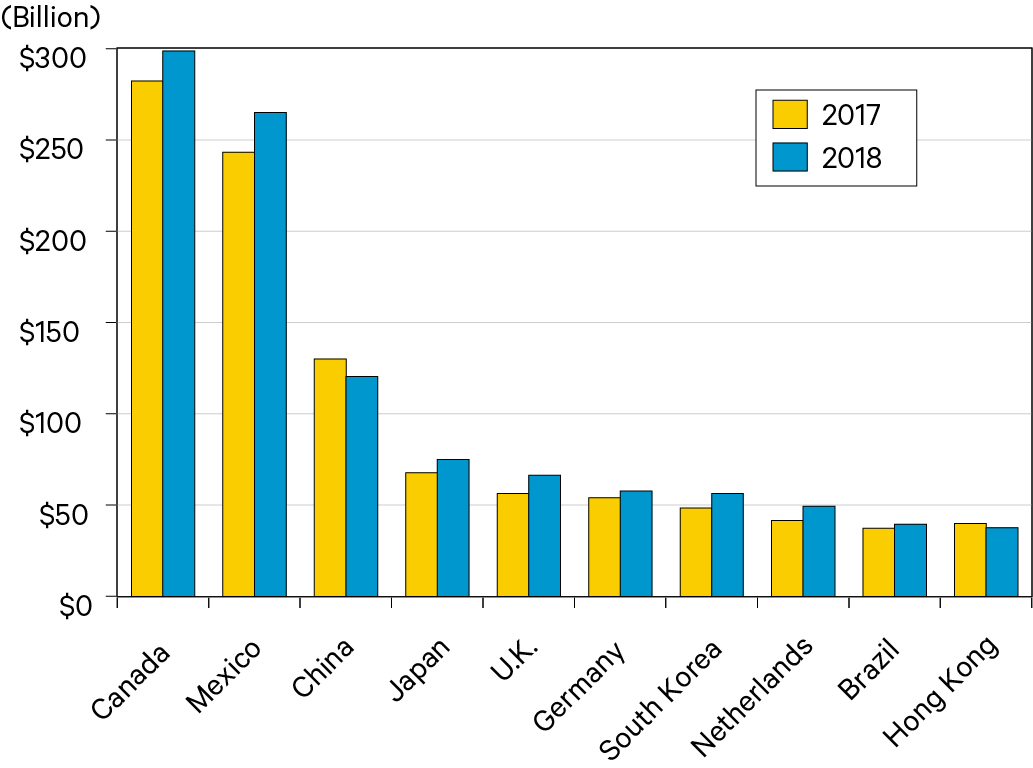 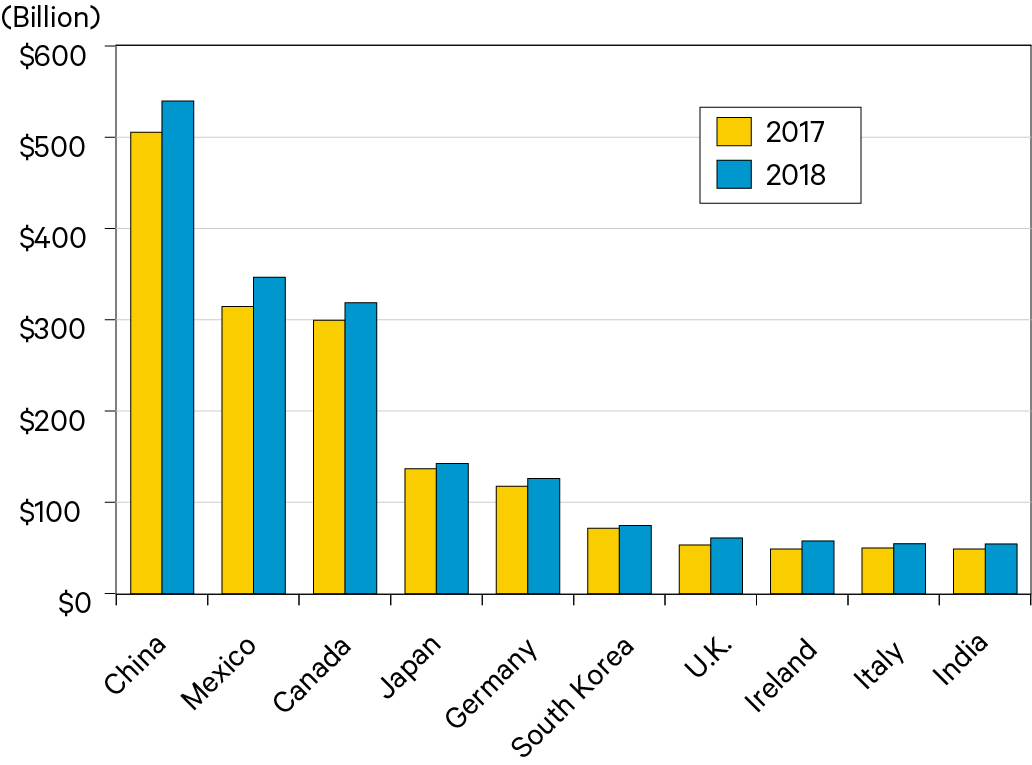 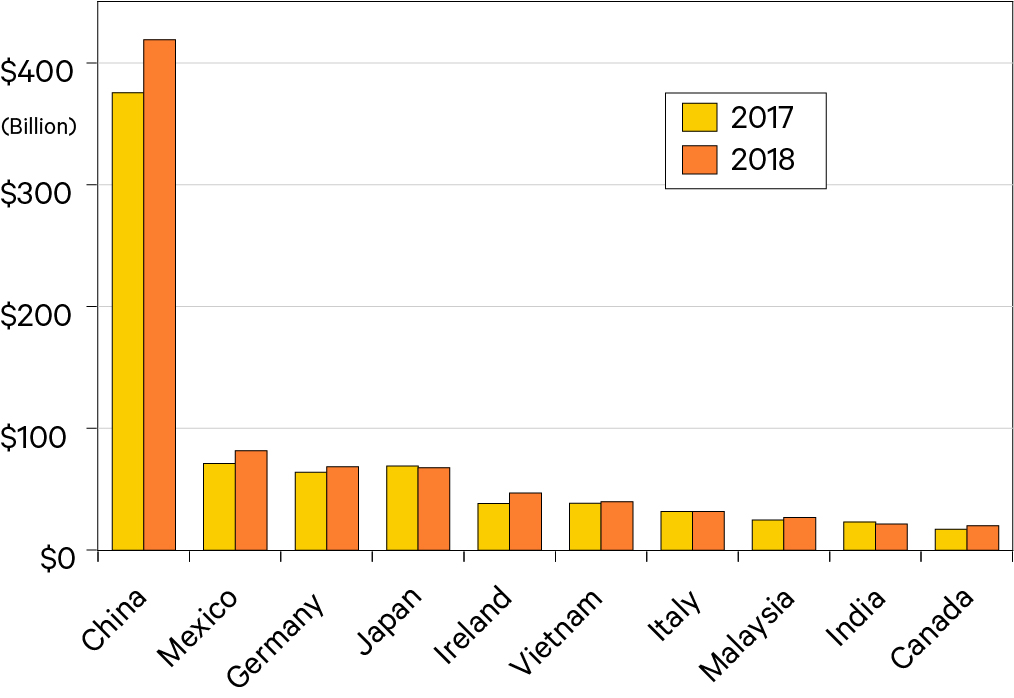 Figure 5 displays the top 10 U.S. export goods to China in 2017 (yellow bar) and 2018 (blue bar). Only three sectors experienced a decline in exports value in 2018: (1) transportation equipment, (2) agricultural products, and (3) waste and scrap. In particular for agricultural products, its decline from $16 billion in 2017 to $6 billion in 2018 was staggering. This is a direct result of Beijing’s tariff and purchasing decisions, and as it happens it fell on rural counties in the U.S. where the President’s support is the highest. By value (Figure 6) imports in each of the leading import sectors increased over the last year.

Figure 5. Top Ten Exports Goods from the U.S. to China

Figure 6. Top Ten Imports Goods from China to the U.S.

The economic relationship between the U.S. and China may bifurcate into a two-tier trading relationship in the future. One tier, some consumer goods, services, some investment, and tourism, would resume in a relatively free trade environment were new trade agreement to be reached. The other tier, goods and services involving advanced technology, information, communication, and national security, will be governed by strategic competition parameters rather than free trade. The question of this update to the annual Cathay Bank / UCLA Anderson Forecast U.S. - Economic Report remains open. Will there be an agreement?  We now have some solid indications that the modest agreement we have been predicting in this series is coming to realization.